Register in advance for this meeting: https://cuhk-edu-cn.zoom.us/meeting/register/tJEvceyorDgiGNfv0YkAspYrqR9IEjx8miIv
(After registering, you will receive a confirmation email containing information about joining the meeting)

Robert W. Cox challenged Samuel Huntington’s “Clash of Civilisations” narrative, arguing for a focus on inter-civilizational dialogue instead of “clash”.  Cox aimed to recast global governance, and future world order, toward a more multi-polar and multilateral world, based on shared norms between civilizations.  The core of the research agenda is on identifying shared inter-civilizational norms, values, and principles, while also accounting for, and managing sources of conflict between civilizations and nations.  The roots of Cox’s thesis on civilizations was a research programme on multilateralism and the United Nations system (MUNS), sponsored by the United Nations University (UNU), that ran from 1991 to 1995.  The programme took a broad view of multilateralism, and asked what entities – states and other – would constitute the multilateralism of the future.  The MUNS programme aimed to foster a “new”, more inclusive, and diverse multilateralism.  In this presentation, Professor Gregory Chin will examine Cox’s concept of “supra-intersubjective understandings” between civilisations as the building blocks for a more multi-polar and multilateral world order, and foundational base for a more negotiated system of global governance between Western and Chinese civilizations.

Gregory T. Chin has been researching China, Asia, International and Comparative Political Economy, and global governance for more than three decades, since the early 1990s.  He has been a professor at York University, Canada, since 2007.  He has published widely on the political economy of China and Asia, the BRICS, global monetary and financial affairs, and global governance.  He was Co-Editor of Review of International Political Economy (RIPE) from 2012-2015, and he is a member of the Advisory Board of RIPE and the Editorial Board of Global Governance journal.  In September 2020, Chin was appointed an Advisor to the Research Programme of the United Nations Office for South-South Cooperation.  From 2000-2006, he worked in the Government of Canada, including as First Secretary in the Canadian Embassy in Beijing, 2003-2006. 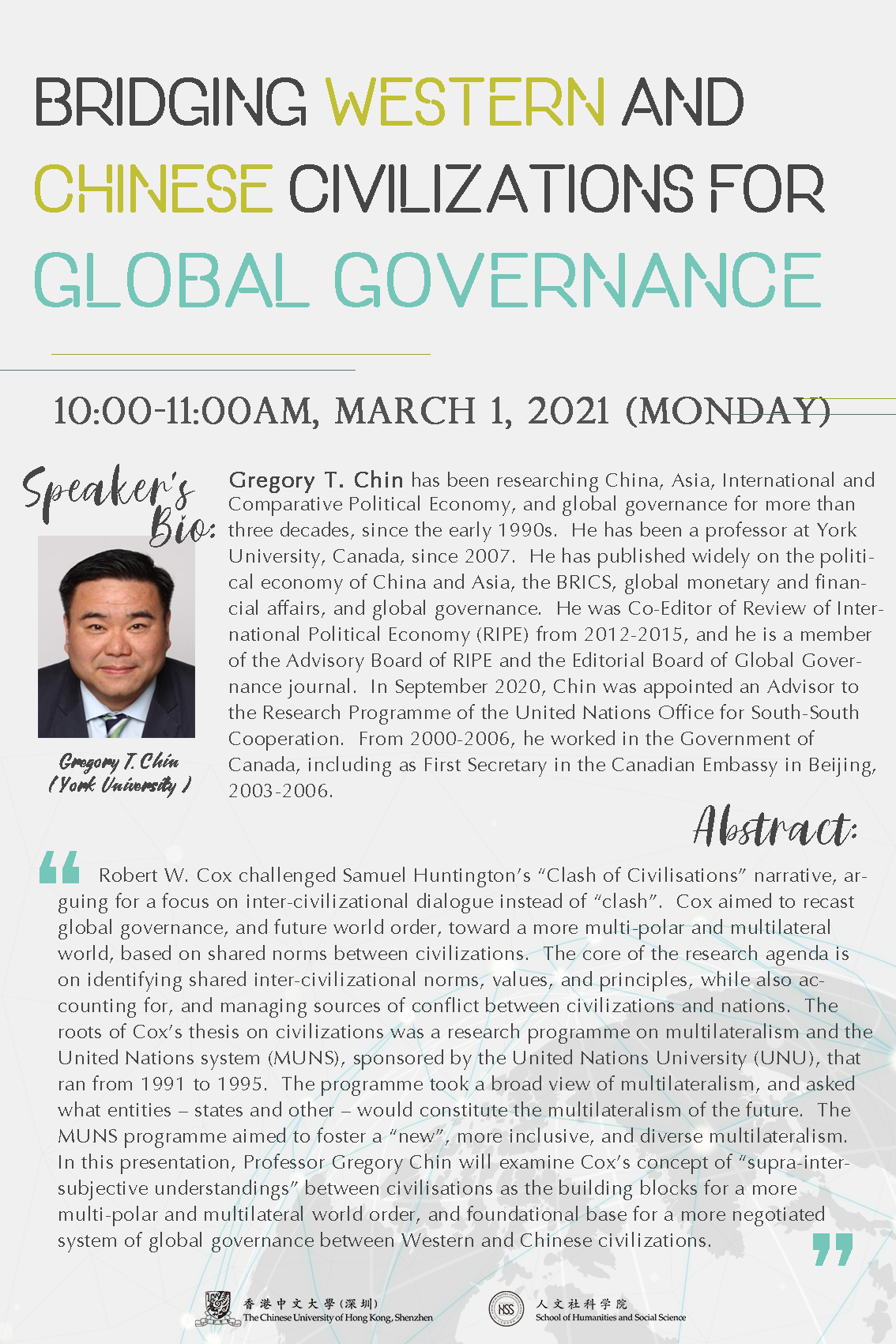